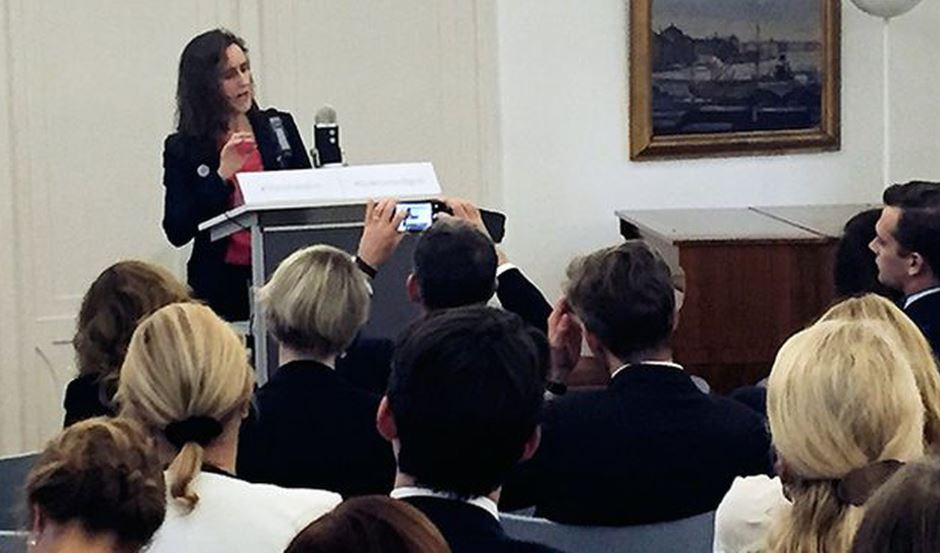 Today is about addressing and celebrating a proud tradition - The Swedish Freedom of the Press Act. Our birthdaychild is celebrating its 250 years´ anniversary.

The Swedish Freedom of the Press Act, is an honoured achievement, resting on long democratic principles, traditions and respect for diversity.

Limitations to media freedom does not only jeopardize free and independent news coverage, but also limits the democracy at large. A limitation can take many expressions and I especially want to put focus on three of them today.

We witness a situation today where the role of journalists is put under hard pressure, where journalists have become a target for hatred, violence, kidnapping and arrests. The presscard used to be a like a shield for the journalist – now it has turned to a target.

Last year, 111 journalists were killed, according to figures from the International News Safety Institute (INSI). The majority of them were local journalists trying to bring stories of crime and corruption to the public awareness.

In too many instances the governments of the world do not protect journalism, they are the very reason behind the abuse.

A few days ago we were all happy to read the news about the investigative journalist Khadija Ismayilova being released from prison in Azerbaijan.

“Her spirit is amazing, she is strong and committed. She is back!” wrote one of her colleagues to Fredrik Laurin, reporter at SVT-program Uppdrag Granskning, just a few days ago.

Mrs Ismayilova, working for the Radio Free Europe, was arrested in December 2014 and sentenced to a long imprisonment. She worked specifically with stories related to state corruption and human rights violations. And she played a great role in picturing the story of Telia Soneras businesses in Azerbaijan, in close cooperation with SVT and Uppdrag granskning. The story, revealing one of the biggest corruption scandals in Sweden, also demonstrates the importance and digital possibilities for journalists to work cross-border with international networks like the International Consortium of investigative journalists.

The arrest of Mrs Ismayilova highlights the plight of numerous other journalists who remain behind bars or being prosecuted for fulfilling their role as journalists. We must further underline the cross-border aspect of journalism and the fact that media freedom and freedom of expression are fundamental rights in one country - and reasons for prosecution in another.

We have seen recent global stories like the Lux Leaks and Panama papers being developed in similar ways. The story around LuxLeaks was published in November 2014 and revealed major financial scandals within the EU in relation to tax evasion. With information originating from whistle-blowers, an international network of journalists, including Swedish Television, participated in the review of the information.

We see a trend of increasing political pressure on the media, not least in Europe.

In countries with strong freedom of the media, public service media often have an outstanding degree of trust, and provides the general public with a broad range of programs.

That is also probably one of the reasons why several states are trying to put pressure on public service. The development in many countries is really worrying. We have heard about Poland, about Hungary. We hear worrying reports from Croatia. But also the current discussion on strengthening the political dependency of the BBC is worrisome.

Additionally, governments that wants to control public service media, just as often try to exercise control over commercial media, by regulation and taxation.

And - let us – again - humbly remember how fast the intentions in our own Freedom of the Press Act was put under pressure.

SVT as well as other media companies are persistently putting the focus on matters related to independence of media and freedom of the press. This is grounded in our strong tradition of press freedom, but also as representatives of independent and solid companies with high trust within the societies where we operate. This is really a challenge for everybody: media professionals, European and national authorities and European citizens.

“A free press can, of course, be good or bad, but, most certainly without freedom, the press will never be anything but bad.”

Last, I want to address the questions of the changing media landscape, its increasing reliance on the internet and the new challenges and possibilities that brings to the table. Not the least when it comes to access.

Recently, SVT, together with 26 other Swedish publishers signed a petition encouraging the Swedish government and parliament to further act to ensure an open Internet. The request is illustrated by a recent cooperation on business models which, in the long run, jeopardises media company's ability to reach the audience, the public.

I hope that the recently decided EU regulation on net neutrality, will be able to guarantee an internet that is equal and open to all. In this context it is important to note that the media also is subjected to other actors to reach its audiences. For us, as media companies it is important that we are allowed to make our own judgement on what to publish and how to arrange it. That freedom is increasingly challenged by the increased dependence on Google, Youtube and Facebook, where algorithms control what information individuals actually can access. We increasingly have a freedom of expression that is regulated from Menlo Park in California.

Sweden has a history of media freedom to be proud of. Therefore, Sweden should take the lead in securing freedom of expression and freedom of the press - also in the digital environment. To support a continued fully open internet is also to support fundamental values. The rights guaranteed offline today should also be guaranteed online, today and in the future.

We should learn the lesson from what happened in Sweden just a few years after the Freedom of the Press Act. We should humbly realise that we can´t take the freedom of expression for granted, even in Sweden. We should vaccinate media – and our democracy – for the future.

During this year, we should try to be as visionary as those who once created the Swedish media freedom and reflect on what is required to sustain an equally vibrant media landscape and informed public in the future. Who knows: Maybe someone in 250 years will look back and reflect on what it was we jointly created. Perhaps that person will even create an event in Brussels to salute it!